The baiMobile® 3000MP Bluetooth Smart Card reader is designed to support most mobile and desktop platforms including Apple iOS, Android, BlackBerry® OS 7, BlackBerry® 10, Windows® 7 and Windows® 8.1 and Windows® 10. ThebaiMobile® 3000MP Bluetooth Smart Card reader supports standard ISO 7816 smart cards such as the Common Access Card (CAC) issued by the US Department of Defense and the Personal Identity Verification (PIV) issued by other agencies of the US Government.

Support for other smart card types is provided by the baiMobile Middleware This wireless solution (baiMobile® 3000MP Smart Card Reader and baiMobile® Smart Card Middleware) permits network or client applications residing on the device to access the credentials stored on the smart card to perform functions such as digitally signing and decrypting emails, and authenticating to secure web sites and network servers. The reader also functions as a badge holder with the printed identification features of the card exposed for visual inspection as seen below. 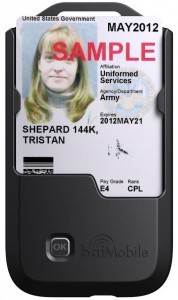 The US Department of Defense has determined that the iPhone’s (and iPad’s) native Bluetooth radio does not meet DISA security requirements (DOD Bluetooth Requirements Spec Sheet). The baiMobile® Bluetooth Adapter has been approved by DISA for use with the baiMobile 3000MP reader. The adapter attaches to the 30-pin or Lightning connector at the bottom of the iPhone or iPad and establishes a secure communications link with the reader. The Bluetooth adapter is not required for Android, Blackberry or Windows devices.

The baiMobile® Smart Card Framework enables client and network applications to retrieve public certificates and perform PKI private key cryptographic operations on the smart card. The Framework supports PKCS#11 API and PC/SC APIs and includes other higher level APIs such as Java CSP (Android). The baiMobile® solution also includes security and device driver files. TheFramework cannot be installed separately on iOS or Android devices – rather, it must be integrated with within an application. TheFramework can also be embedded into the Android OS by the handset manufacturer.

The baiMobile® 3000MP reader uses the Secure Simple Pairing’s Numerical Comparison Association Model pairing method available in Bluetooth version 2.1 and higher. At each pairing event, a randomly generated six digit passkey is generated and displayed on both the device and the LED panel on the reader. The user must compare both numbers and acknowledge that they are the same. This feature is not available in older versions of Bluetooth (2.0 and lower). As a result, the reader will only operate with devices with Bluetooth version 2.1 and higher. The latest version of the reader firmware supports the simultaneous Bluetooth pairing of five (5) different devices, allowing to user to easily switch between a mobile phone and a desktop, for example.

The baiMobile® 3000MP reader meets both the NSA and DISA requirements for secure Bluetooth communications. The reader employs the highest security level (Mode 4: service level) available in Bluetooth version 2.1 and higher. All data transferred between the device and the smart card reader is encrypted using a FIPS 140-2 approved crypto module that provides a 256-bit AES encrypted tunnel over standard 128-bit Bluetooth encryption. The Wireless CAC Reader operates in the “non-discoverable” mode at all times (except when pairing) – hidden from other Bluetooth devices and rejecting all other pairing requests.